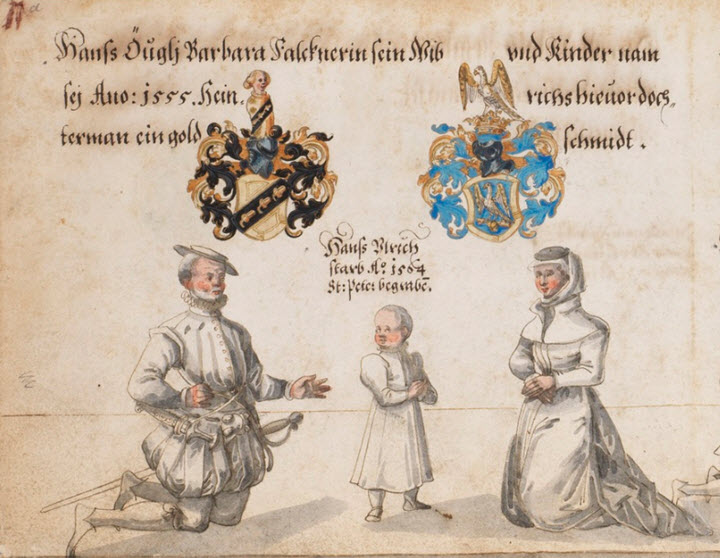 Detail from the 1598 Falkner Stammbuch.

This project is concerned with four genealogical books belonging to the Falkner family, a well-connected part of the elite in the city of Basel during the early modern period up until the late 19th century. It is part of the master thesis of Anna Reimann under the supervision of Prof. Dr. Susanna Burghartz. The thesis is mainly concerned with questions of family identity, family memory, family representation and conception, but, due to the special qualities of the sources, is also interested in materiality and fashion.

The genealogies consist mainly of miniature paintings of family members, most often arranged in groups of husband and wife with their respective children. Descriptive and additional information is given in text around the images. The books were first assembled in 1574, 1598, 1690 and 1741, but all continued well into the 19th century. Therefore, they consist of a variety of layers, with influences from many different writers and painters and a highly repetitive imagery and language. The digital infrastructure is hence provided to analyse the small but significant changes within and in between the books over the course of the nearly four hundred year span of production as well as to get a better understanding of the inherent logic of the genealogies in constructing the family history.